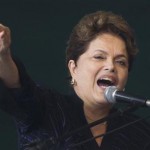 The story Franklin Briceno and I did on the Peruvian government’s attempt to begin to effectively police the world’s biggest fishery _ the anchoveta industry _ against misbehavior by the commercial fishing fleet was published precisely as the Production Ministry announced results of this season’s catch.

The day’s headline: The fleet did not catch the full quota of 810,000 metric tons (it reported catching 732,000 tons). In the seventh week of the 10-week season that ended Jan. 31 it began breaking the rules blatantly by catching too many juveniles, which is illegal and endangers regeneration. They illegally harvested more than 18,000 tons of juveniles.

“They have no social conscience,” said vice minister Paul Phumpiu. He is trying to get the industry to divert more of its catch to human consumption but so far doesn’t seem to have much traction.

A pilot project to promote the anchoveta as table fish, chiefly by distributing free samples at markets in Peru, is about to get under way. It’s budget: about $4 million.