It was the kind of security lapse that gives election officials nightmares. In 2017, a private contractor left data on Chicago’s 1.8 million registered voters — including addresses, birth dates and partial Social Security numbers — publicly exposed for months on an Amazon cloud server.

Later, at a tense hearing , Chicago’s Board of Elections dressed down the top three executives of Election Systems & Software, the nation’s dominant supplier of election equipment and services.

The three shifted uneasily on folding chairs as board members grilled them about what went wrong. ES&S CEO Tom Burt apologized and repeatedly stressed that there was no evidence hackers downloaded the data. 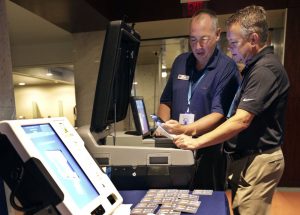 The Chicago lapse provided a rare moment of public accountability for the closely held businesses that have come to serve as front-line guardians of U.S. election security.

A trio of companies — ES&S of Omaha, Nebraska; Dominion Voting Systems of Denver and Hart InterCivic of Austin, Texas — sell and service more than 90 percent of the machinery on which votes are cast and results tabulated. Experts say they have long skimped on security in favor of convenience, making it more difficult to detect intrusions such as occurred in Russia’s 2016 election meddling.

The businesses also face no significant federal oversight and operate under a shroud of financial and operational secrecy despite their pivotal role underpinning American democracy.

In much of the nation, especially where tech expertise and budgets are thin, the companies effectively run elections either directly or through subcontractors.

“They cobble things together as well as they can,” University of Connecticut election-technology expert Alexander Schwartzman said of the industry leaders. Building truly secure systems would likely make them unprofitable, he said.