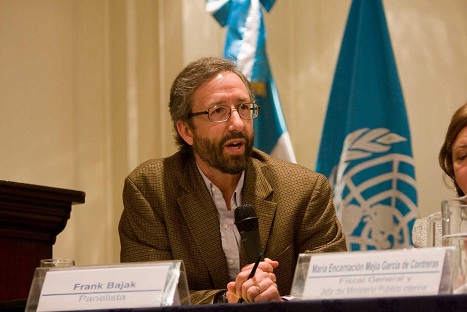 Frank Bajak knew he wanted to be a foreign correspondent when he watched the TET offensive on TV in 5th grade. His father was the NBC News executive in charge of getting newsfilm shot worldwide to New York and on the air. It took two days from Saigon.

A native of Scarsdale, N.Y., and Oberlin College graduate, Bajak did post-graduate studies at Jagiellonian University in Krakow, Poland. A crackdown on the Solidarity free trade union movement interrupted them. Then came martial law. He joined The AP in Warsaw the next year. As a foreign correspondent for two decades he covered post-Iron Curtain eastern Europe,  Colombia’s seemingly intractable conflict, the war on drugs, the Haiti quake aftermath, Latin America’s left turn, the extractive industry’s assault on indigenous cultures and the Hugo Chavez phenomenon.

Bajak is currently based in Boston, covering cybersecurity with an emphasis on Big Brother tech, cyber-espionage and the backlash against techno-positivism and how we govern cyberspace without spoiling it.

From 2000-2005, Bajak was the AP’s first technology editor, based in New York City. He believes that societal and cultural transformations propelled and accelerated by science and technology, equal in their potential for good or harm, are the single most important story of our time. But maybe that was always so.