Vega was a rarity in this nation where cops, courts and congress are badly compromised by corruption . An earnest provincial narcotics officer, he had made a career of actually doing what he was trained for: locking up criminals.

Defying death threats from narcos, he led a hand-picked team of trusted officers who consistently scored trafficker arrests and record drug seizures even as Peru became the world’s No. 1 cocaine producer. In a country where police are as likely to take bribes as to make arrests, Vega was a hero. Three times, he had been named police officer of the year. 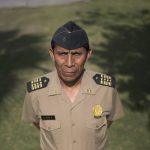