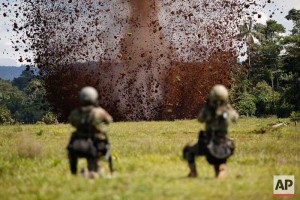 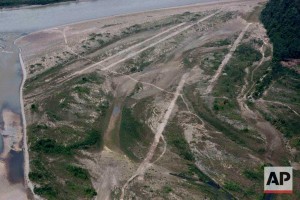 By FRANK BAJAK and FRANKLIN BRICENO

HUANTA, Peru (AP) — He slides two T-shirts, shorts, canned tuna, toasted corn and boiled potatoes into the rucksack atop 11 pounds of semi-refined cocaine. In a side pocket, a .38-caliber Chinese pistol.

Mardonio Borda is a 19-year-old native Quechua with broken Spanish and a sixth-grade education. But he has at least $125,000 worth of drugs on his back that he will carry out of Peru’s main coca-growing valley. He is among untold hundreds of cocaine backpackers who make the difficult and dangerous trek up Andean mountain paths first carved by their pre-Incan ancestors.

In this country that overtook Colombia in 2012 as the world’s No. 1 cocaine-producing nation, Borda regularly hikes within a few hours of the Machu Picchu tourist mecca, bound for Cuzco with drugs. Sixty percent of Peru’s cocaine comes from the remote Apurimac, Ene and Mantaro river valley, and the backpackers trek for three to five days to deliver cocaine to traffickers who move the drugs on for export. But it is not the lung-searing ascents to high altitudes that worry the young men. It is the armed gangs, crooked police, and rival backpacker groups who regularly rob cocaine’s beasts of burden on journeys that can extend 100 miles (160 kilometers) or more.

Hauling cocaine out of the valley is about the only way to earn decent cash in this economically depressed region where a farmhand earns less than $10 a day. Beyond extinguishing young lives, the practice has packed Peru’s highland prisons with backpackers while their bosses evade incarceration.

It is a big business. Roughly one third of the 305 metric tons of cocaine that the U.S. government estimates Peru produces each year travels by foot.