I have occupied myself with little else since we learned on Jan. 7  that a provincial prosecutor planned to ask a judge in Nazca to throw our photographer Rodrigo Abd in jail at the request Peru’s Ministry of Culture because he had covered Greenpeace’s Dec. 8 stunt at the Nazca lines. 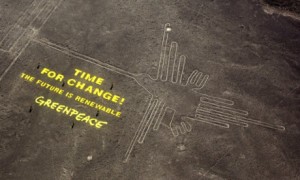 The court hearing has twice been postponed. It is now set for Jan. 27. We have made our case publicly that Rodrigo and the Reuters videojournalist who also covered the action on assignment should not be jailed during the preliminary investigation. The Foreign Press Association of Peru and the Inter-American Press Association asked that all criminal proceedings be halted against the two journalists.

Now, Greenpeace has weighed in.

In a note delivered yesterday to the prosecutor , executive director Kumi Naidoo of Greenpeace International stressed that the journalists “were not involved in the planning, preparations, or  execution” of the action, according to spokesman Mike Townsley.

In the note, Townsley told me via email, Naidoo explains Greenpeace’s press strategy/policy a bit.

“A large part of Greenpeace’s force for positive change comes from generating debate about public interest issues. As such, journalists are contacted to independently cover campaign activities. These journalists are always and necessarily independent from these activities. Their  independence is derived from journalistic ethics and standards that demand, among other things, telling the story from an objective perspective. It is their independence that gives them their professional credibility. A clear distinction should be drawn between the people organising events and the  journalists covering them. The rights of journalists to gather and report on news must be respected and protected.”

The note may sound self-serving, and indeed Greenpeace does cultivate the news media like any organization that seeks publicity. But do consider that Rodrigo’s visual documentation of the Nazca lines action provided people with independent information that helped them assess it and form their own opinions. That’s our role in a free society.